A semi-weekly or biannual reco, straight from the playlists of yours truly…

Oh, my good lord. Oh, my BEST lord. At the risk of sounding mildly appropriative — I slept on this one. I completely slept on Apink, and I don’t think I can — should — ever live it down.

I love everything about this song — the music itself, of course, and also the MV. The colors, the lavish detail, the frowny-girl scowls, and even Naeun’s cornrows (speaking of appropriative). This is a really bold outing for Apink, as far as I’ve seen (having missed a few of their more recent evolutionary steps, namely “%%”). It pops. There’s a big synchronized hair whip in the choreography, and I think that’s the quintessence of the piece. It’s fast and fun — it’s a real jolt. And it’s lean, maintaining a consistent vibe throughout, rather than peaks and valleys. 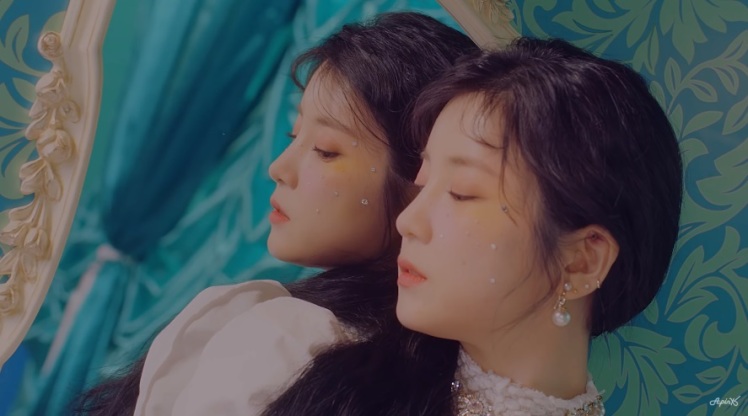 Chorong puts on a cold, cool exterior, but she’s always game for the trouble the rest of the team gets into

Because of “Dumhdurum,” I’ve been doing a lot of thinking about the group, watching a lot of Apink-related content online, and I’ve gained a significant appreciation for them, more in the past week than I have in the year or so I’ve been enjoying a handful of their songs. Still, they don’t have the hit ratio of Red Velvet for me (nobody does, even outside of K-pop — 2Pac is up there, Paramore, maybe the first two Linkin Park albums if we’re going way back in time), and so I was always hesitant to call myself a true Apink fan — Pink Panda, I understand, is the fandom name.

I’ve always pitied Apink because their maknae, Hayoung, is the tallest/biggest. What are you supposed to do there?

I don’t have a bias in Apink, and I don’t have any ships — part of me thinks this is on purpose. I mean, it should be Eunji, and then Eunji and Bomi respectively, but it’s not. I love Eunji as an actress, I think she’s an incredible vocalist — “Hopefully Sky” is gorgeous, but when it comes to musical performance, I appreciate her most as a team player, and I’m struggling desperately to communicate what I mean by that without it sounding insulting. Because this is the thing: based on the admittedly tiny sample size of K-pop groups I’ve studied (Red Velvet, Girls’ Generation, Loona), I think Apink has the best group chemistry. Pair off any two of them and you’ll come up with something fun. Namjoo and Hayoung form an amazing comedy duo, with Namjoo the energetic fall guy to Hayoung’s austere but innocent straight man. Eunji loves to neg on Chorong, who takes on an incredible put-upon leadership affect when it comes to all of her “children.” For a specific example, the way she moans “Bbom” at Bomi burping on her hijacked mukbang. And then there’s Bomi, of course, with the infectious laugh and uncanny ability to bring the wild out of Naeun who is, by my count, the most introverted idol of all time. 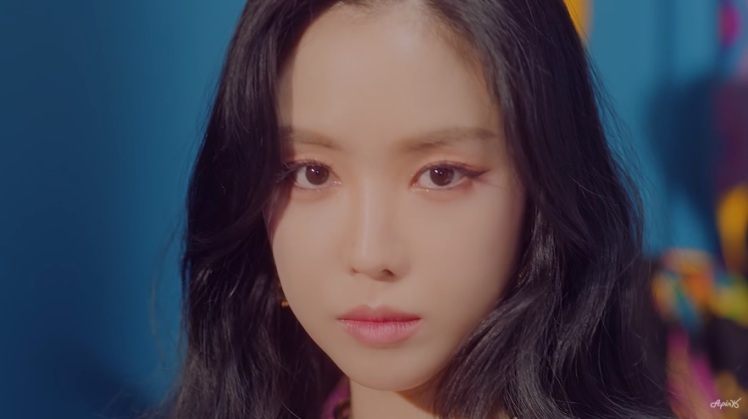 Naeun is considered to be the visual of the group, and indeed she has a certain Taeyeon-Irene-Jennie, if you will

They all work together so well, and their relationships feel so sisterly, or best-friend-like. By contrast, Red Velvet is often accused of being icy (tragic, romantic), and I think they sometimes hold a lot back for the cameras. I’m not gonna say that Irene and Seulgi are actually into each other, but I will say their energy is difficult to quantify. It’s a lot less ambiguous between Eunji and Bomi, for example, who are exactly myself and my oldest childhood friend. I’m Bomi and my friend is Eunji — she’s just a little bit too physically aggressive, a little bit too much of a prankster. Eunji has this boyish charm, and I feel like she’s most comfortable hitting Bomi (who else, right — it’s Chorong-unnie or the babies) or shoving her between hotel beds, as the case may sometimes be.

I just identify with Bomi so much. Fun fact: she’s a day younger than me

Maybe it’s too much of a leap to say that their group chemistry affects their music, but I’ll draw that connective line anyhow: one of the striking things about this song in particular is how the six voices flow seamlessly into one another, from Chorong to Eunji and peaking with squeaky Bomi in the chorus. At least for this song, they all represent not pitches but qualities along the spectrum of a beautiful sonic landscape. I think the MVP here is Hayoung, who’s got an ethereal, almost trembling melancholy — vulnerability offset by her absolutely fierce look. However, we locate the specific character of the song in the instrumentals, characterized as Spanish-infused at least on Wikipedia, which perfectly backs the staccato vocals.

I cannot take Namjoo seriously ever again, not after that Pipi Longstocking look

While the song may not build in intensity, the video certainly reaches a narrative climax, suggesting an ironic underpinning to the lux imagery. In addition to the intricacy of the wealthy theme, the appropriate, then, abundance of things, stacked or arranged, there’s great emphasis of motion (kicking up the water, that one fish-eye of Namjoo sitting on the sink, with that vertical line) and a compelling gallery of faces. The direction of the video is impeccable, maximizing how each members’ faces interacts with the camera — Chorong can look dead-on and say volumes. To chart growth, I’d contrast this against “Cause You’re My Star,” which I love, but the faces there are extremely goofy, almost accidentally sinister.

Eunji was the first Apink member I was able to put a name to, for her part in “NoNoNo”

On the previous Pick of the Day, about Irene & Seulgi’s debut, I preempted myself by talking about the solo/group difference (which I already had down on a draft for a future post about Sooyoung and Yoona’s solo work). One of the things I love about K-pop as a genre is the sharpness of character, and with Red Velvet especially, you appreciate how much experimentation is required to pump out a “Psycho” or a “Red Flavor.” Similarly, a lot of the Apink music I’ve heard (mostly their early stuff, from which I really like tracks like “Prince” and “Cat”) has that kind of vibe. And thus, we arrive: “Dumhdurum” is a perfect song, like “NoNoNo” before it. But where I took issue at least with the video of “NoNoNo,” which mashed cute and sexy together like a zero divide for my robot brain, the formal elements of “Dumhdurum” bespeak a maturing style, ethos, and above all else, a confidence.

The view count for the MV is low, in the 20 millions, and this hasn’t gone unnoticed by the commenters. It’s unfortunate, and Apink does seem to be locked out of the top tier girl groups (if it’s Blackpink, Twice, and Red Velvet in that order), though “Dumhdurum” charted extremely well and won all sorts of awards. To return a moment to Naeun’s shyness, the group also strikes me as people first, and those who never really cared about fame. They put the work in, and they do so a healthy amount, where I could see them just as happy doing other things, and yet they’ve done this for ten years. I don’t get a sense for ego or conflict here, and the positivity of a sisterhood reflects in the music. These are talented artists who do amazing things solo, in pairs and in any given combination or permutation. As a team of six however, when they return to center, it’s dynamite. 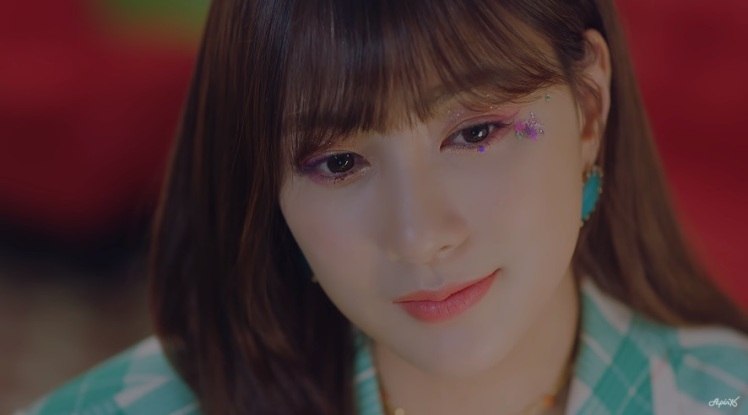